A little about myself

My name is Amber Everingham and I am a Marriage Celebrant and Justice of the Peace. 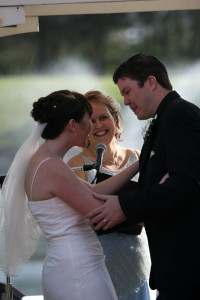 I grew up in Kingscliff, went to Kingscliff Primary School and later to Tweed River High School and now reside in Murwillumbah, so I am proud to call the Tweed Valley my home.

I am married to a marvelous man who also happens to be my “Roadie” come “Technician”.

I have 3 beautiful children, Sharnee, Jaab and Talitha, as well as 3 step-children, Melanie, Matt and Corinne. Between the two of us we have 18 grandchildren and 3 great grandchildren.

You ask me what was your motive in become a Marriage Celebrant? – This is my Story

So the doors were closed to me – I thought. Every time I made the enquiry after that I was told the same thing.

In early 2000 I was reading the newspaper and much to my surprise and pleasure there was an add in there about Celebrant Courses. I made enquires straight away to do the course, but was told that it still can take a couple of years after you are qualified to become registered as there was still a cap on the number of Celebrants that were allowed in an area.

That didn’t deter me one little bit, so I enrolled, did the course, and waited patiently for that letter to come from the Attorney General’s Office to say that I was registered.

I’m blessed, what more could I ask for? Oh yes, I did get that letter and yes I am a Marriage Celebrant -now you know my story.

We use cookies to ensure that we give you the best experience on our website. If you continue to use this site we will assume that you are happy with it.Ok